When it comes to material objects, I think most people have certain items that they covet more than others. As for myself, I have a slight issue with scarves and bags. When my aunt and I came to Oaxaca when I was 19, I bought a woven bag from some Oaxacan village and although that bag is in a very bad state today, it remains my favorite. Now that I think about it, I might have subconsciously picked Oaxaca for our summer trip because I wanted another bag just like it. Scary. Long story short, I had been searching for one since we landed, but much to my dismay I had yet to see a bag like it in the markets around the city. Not being one to give up easily, I researched the surrounding villages and their handicrafts and found the name of a village that specialized in handmade woven bags. I found a tour company that went there, and on Sunday we were set to go.

We started the day in search of an early morning breakfast before our guided tour of ‘The Magical Craft Route’ began. We have hit a different café each morning thus far and with the exception of a couple of dodgy experiences, we have been quite lucky. Marty tries a new Frappe at each locale, and I have chai. I think there is a Starbucks somewhere on the other side of town, but luckily we have not stumbled upon it. From omelets with green parsley potatoes to egg and cheese topped bagels with mole sauce, we have tried it all. Yesterday, however, was the most decadent thus far. The girls ordered waffles with Nutella and were shocked when the food emerged. It was a normal enough looking waffle, topped with fresh fruit and cream, but about an inch of Nutella covered the entire waffle. Saying it was a dessert breakfast would be putting it lightly. They were giddy with anticipation when it came out, but by the end of it I think their obsession with Nutella had finally come to an end.

After breakfast we headed towards the Zócalo to find a representative from the San Tours Company to take us out of town. We had been handed a flyer a few days before and knew where we wanted to go. The Zócalo is a park in the center of town, and is generally a lovely open-air, tree-lined space where people can sit or walk around. Since May 15th, however, the Zócalo has been filled with protesting teachers on strike who have taken over the space and set up a tent city where they are protesting the educational reforms the government is trying to impose upon them. Apparently, the government is trying to mandate a fee for tuition and books for the families who send their children to public schools, and in the poorest states like Oaxaca, this means many children will be unable to afford a basic education. Some families have the means to send their children to private schools, so these reforms do not affect them. Most of the people I have talked to see it as just one more way the rich stay rich and the poor stay poor. Children here in public school don’t get out for vacation until July, but since the teachers have been on strike, they have already been out for a month. The problem is that not only are the students not getting an education, but the businesses in and around the Zócalo are basically shut down due to the numbers of protesters who have occupied their space. This is completely legal in Mexico and happens regularly. This morning as we were walking around it, the air was filled with smoke as enormous piles of tires and trash had been burned during the night in the middle of the streets. Apparently, it was another act of protest and the police and teachers had clashed over it the night before. We were told it didn’t end well.

The tour was to last from 10 to 5 and include 5 stops along the craft route south of the city. The cost was 250 pesos per person (roughly $13 USD), but seeing as up to this point we were only accustomed to the cramped conditions of squeezing five people into a small taxi, it was totally worth it. Our tour guide was Soledad, a sweet girl from the area that had studied English and business administration in Iowa for a year, and was now saving money to go to the University here. At ten we boarded our spacious 12-passenger, air-conditioned van. We were the only people on the tour, so we had plenty of room to spread out. I really only wanted to go to two places, so we got Soledad to skip the portion of the tour that included a small museum and church so we could spend more time in the villages.

Our first stop was in the small pueblo of Ocotlán de Morelos at the studio of Apolinar Aguilar Velasco, a famous craftsman of handmade swords and knives. We spent a good hour at his studio as he taught us the 100 year old process he uses. What I found amazing was that they use all recycled materials from melted down keys to car pistons. His swords have been featured in many movies like Conan the Barbarian, and he now exports knives and swords to the U.S. He even has a seasonal workshop in Wimberly, Texas where he makes knives for festivals and the movie industry. 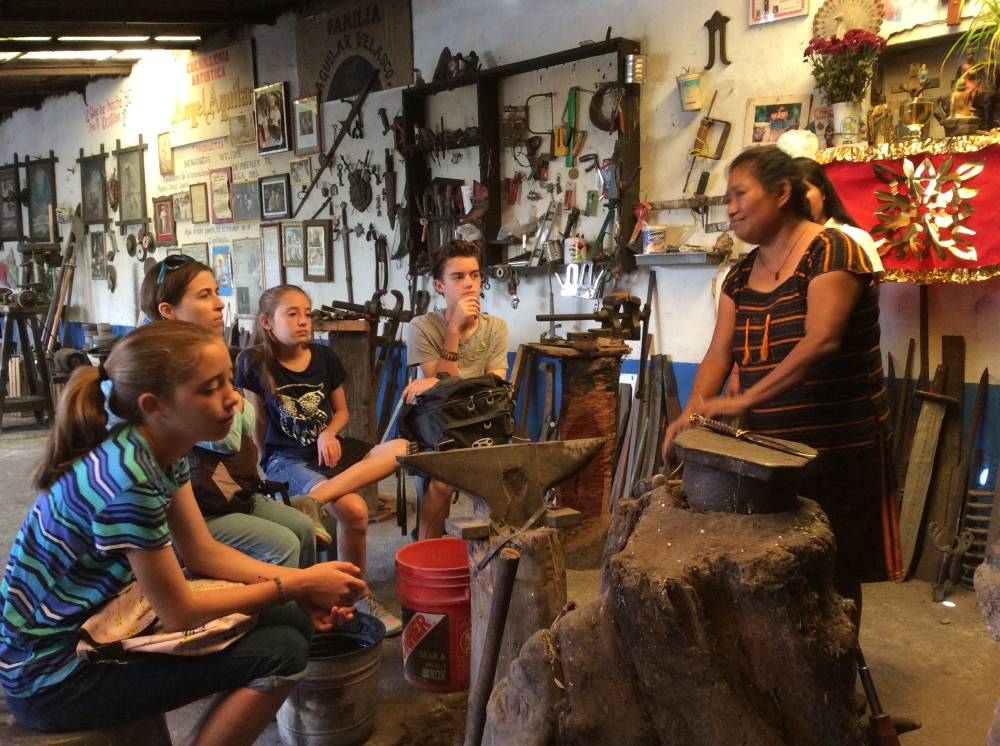 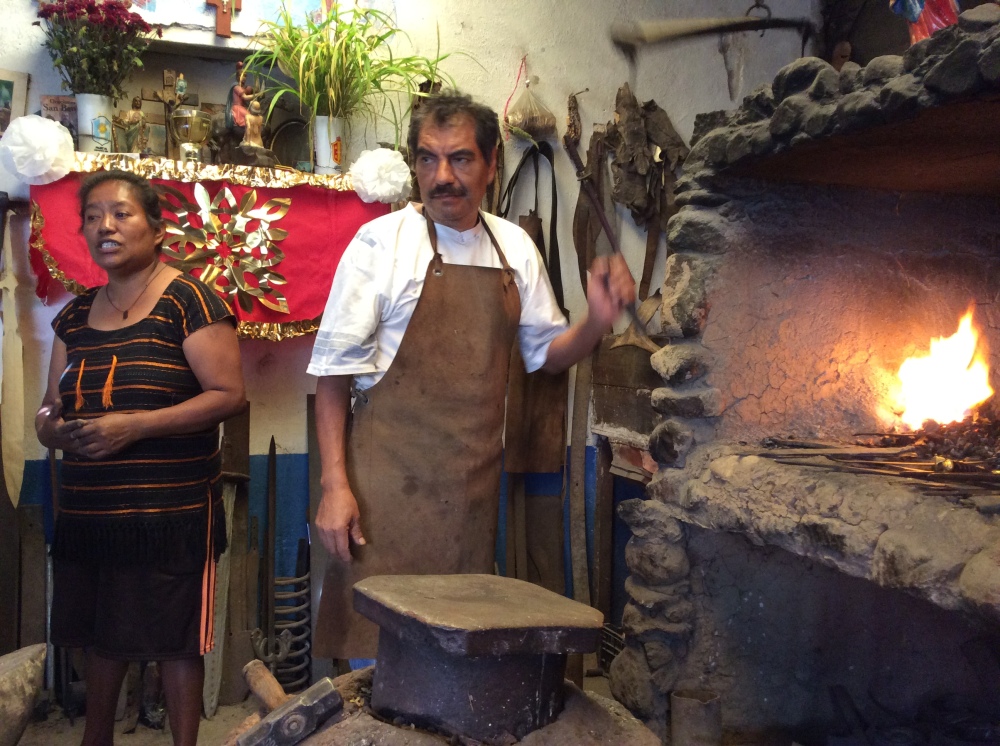 Next, we got back into the van and drove to the town of San Martín Tilcajete, famous for Alebrijes, fantastical animals carved out of wood and then painted with bright patterns. We visited the studio of Jacobo y Maria Angeles.  The craftsmanship was crazy and it made both Marty and I green with envy. 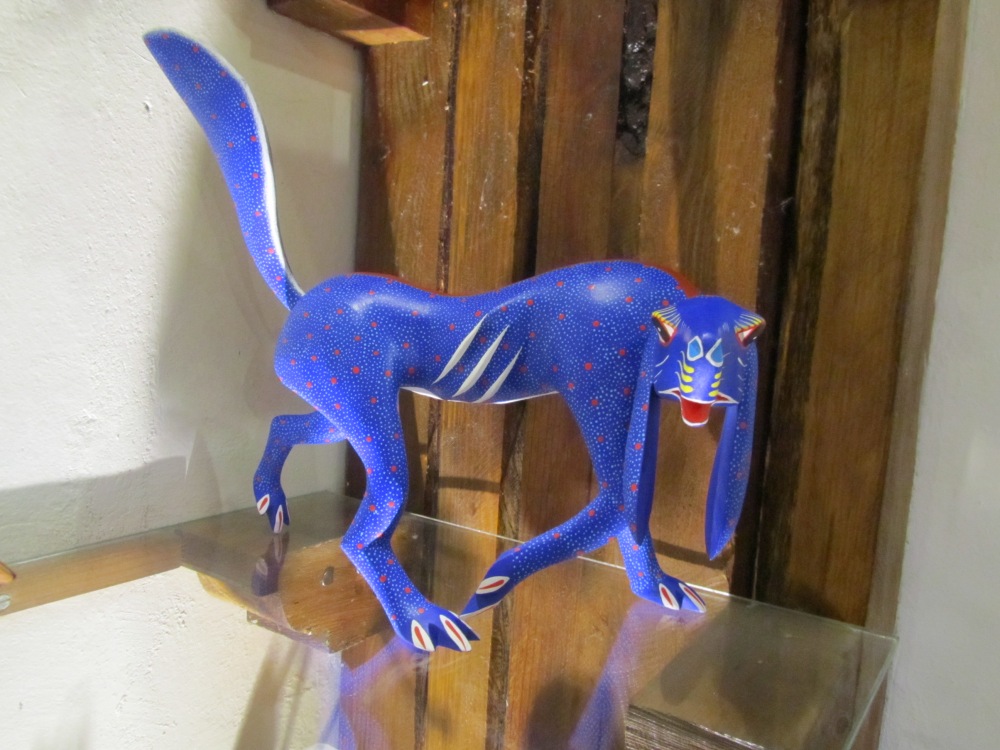 After eating lunch, we finally headed to search for the bag I wanted in Santo Tomás Jalieza. I was expecting a market-like atmosphere with many vendors and lots of haggling, but was surprised when we pulled up to a large, wooden, open-aired building off of the highway. Apparently, the government built this central co-op type structure two years ago as an initiative to help the weavers of this area consolidate their efforts and therefore become more profitable. It seems to be working and it was downright wonderful. I found the bag I was looking for, but unfortunately there were so many wonderful colors that I couldn’t decide on just one. And then of course, my family became enamored with the array of bags and the innumerable color choices, and they all needed one as well. Lucky for us, we had yet to buy anything on this trip and felt slightly justified in buying more than our fair share. I suppose in the end, the money goes to amazingly talented women. More importantly, their craftsmanship is truly astounding. Whatever helps me sleep at night, I suppose. 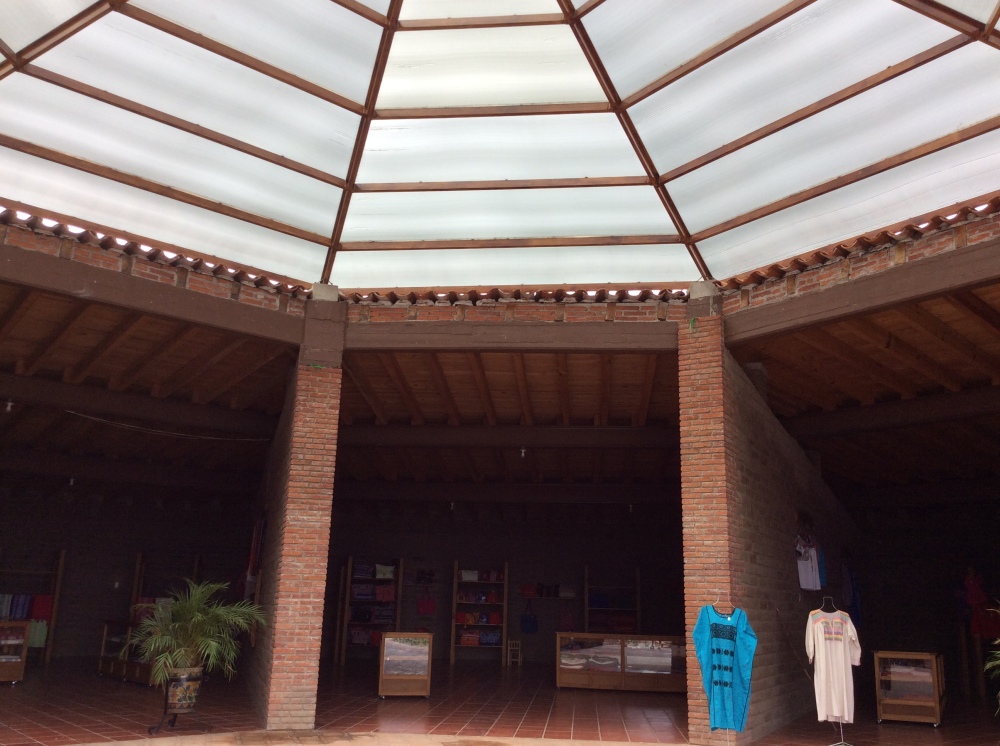 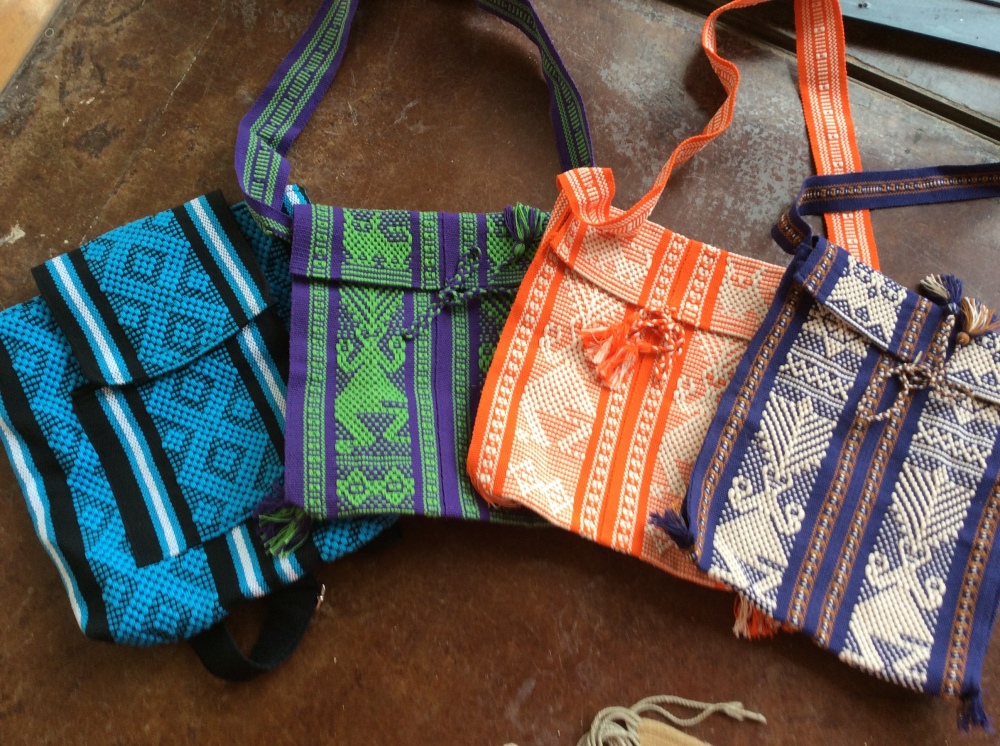 We were back in town before five, just in time for nap-thirty. Not wanting to venture out again for dinner, we decided to take a chance on a pizza flyer we found stuck in our door the day before. It was called SUPER PIZZA! How could we go wrong? I called and ordered the pizza, but when I told the man the address, guess what? He had never heard of it. After repeating the address a few times, he assured me he would figure it out and have the pizza to me in 45 minutes. Two hours later, I called him back.

Another 30 minutes later, the phone rang.

“I can’t find your place. Can you come downtown and pick it up yourself?”

By now it was 9:15 at night. Desperate, I walked outside to see if I could find the name of some intersection that might help him locate us. Just when I was about to reach the range limit of my little cordless phone, a little old lady came walking down the alley. I decided to take a chance and I asked her if she could get on the phone and tell the pizza guy how to get to our house. Fifteen minutes later, we were scarfing down really cold, sub-par pizza. She even came out of her house when the pizza scooter arrived just to make sure it got there safely.

The girls start language school tomorrow. Excited is not necessarily the word I would use for their outlook, but I look forward to putting them in an uncomfortable situation and watching them figure it out. I am optimistic they will be just fine.