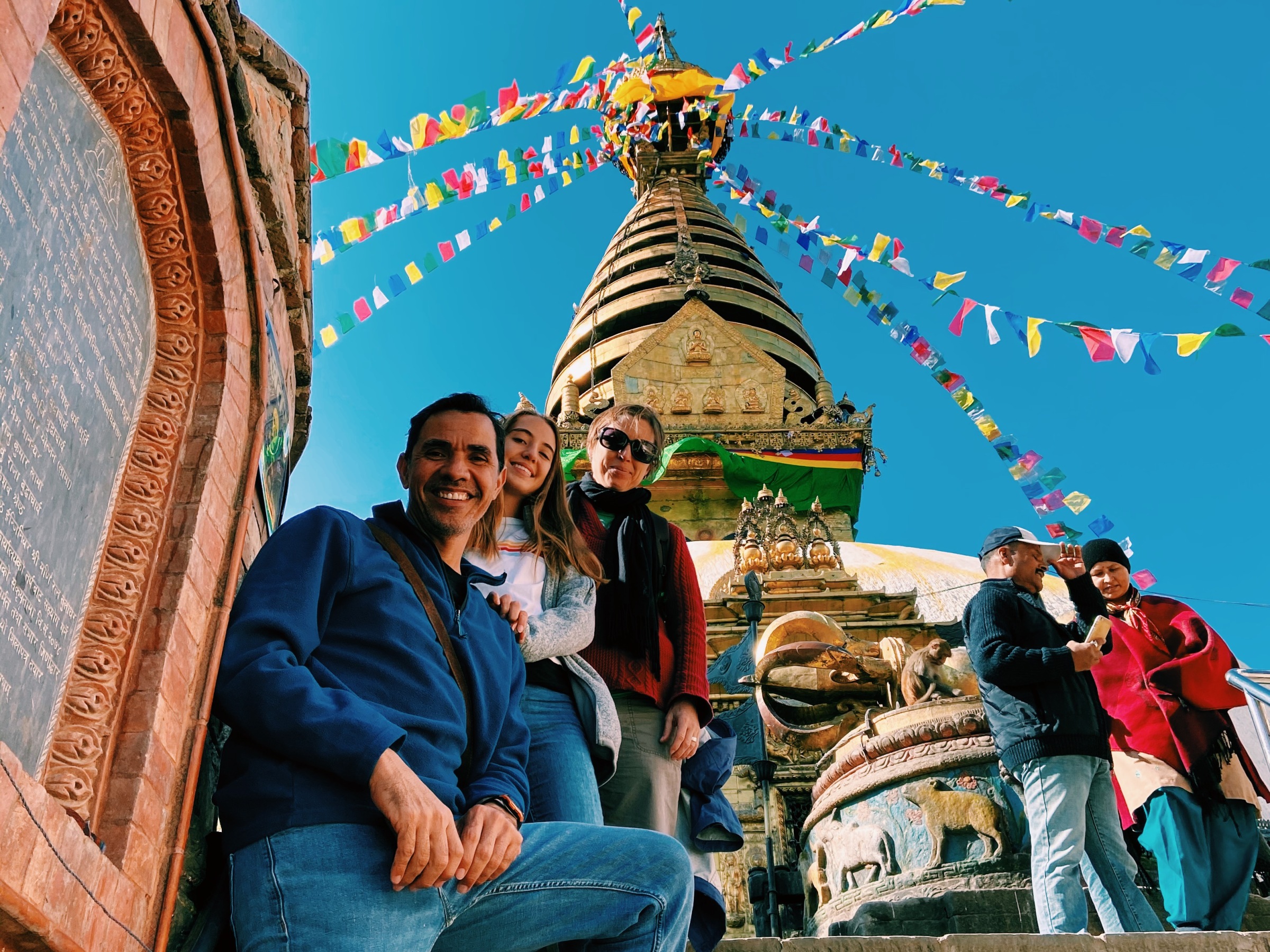 As a general rule, Party Marty is quite the culinary adventurist when we travel.  That being said, I frequently question his food choices.  When he veered off of the beaten path on Thursday for some local snacks, I probably should have intervened.  Or perhaps it was the free nuts at the upstairs bar that evening that according to him tasted oddly like butter.  Whatever it was, Marty was struck down with Nepal’s version of ‘Montezuma’s Revenge’ yesterday and we spent the day inside being lazy.  I told the girls I was perfectly capable of leading the way without their father, but for some odd reason they didn’t want to leave him behind.  Personally, I don’t think they trust me, but luckily they eventually got hungry and I was able to prove that yes, I too can be an able-bodied tour guide.

Marty woke this morning feeling a tad better and was up for a bit of exploring.  I wonder if he knew that exploring would take us on a hour-long hike into the non-touristy part of the city and then up 365 stairs to the oldest temple in Kathmandu.  After a lovely breakfast at The Revolutionary Cafe, we were off.

The Swayambhunath Stupa is affectionately termed ‘Monkey Temple’ and when you finally reach the path that leads straight up it’s not difficult to see why.  At first it is a bit alarming because it is hard to tell if they are friendly.  There are so many monkeys of all sizes and degrees of healthiness that you just stand there frozen and stare.  They nonchalantly come right up to you, but don’t seem to want anything or even care that you are there.  After you quickly grow accustomed to them, you see that they co-exist with the abundance of visitors and street dogs. Other than a few squabbles over food, the monkeys and dogs just lay around in the sun… dogs sleeping, monkeys grooming. 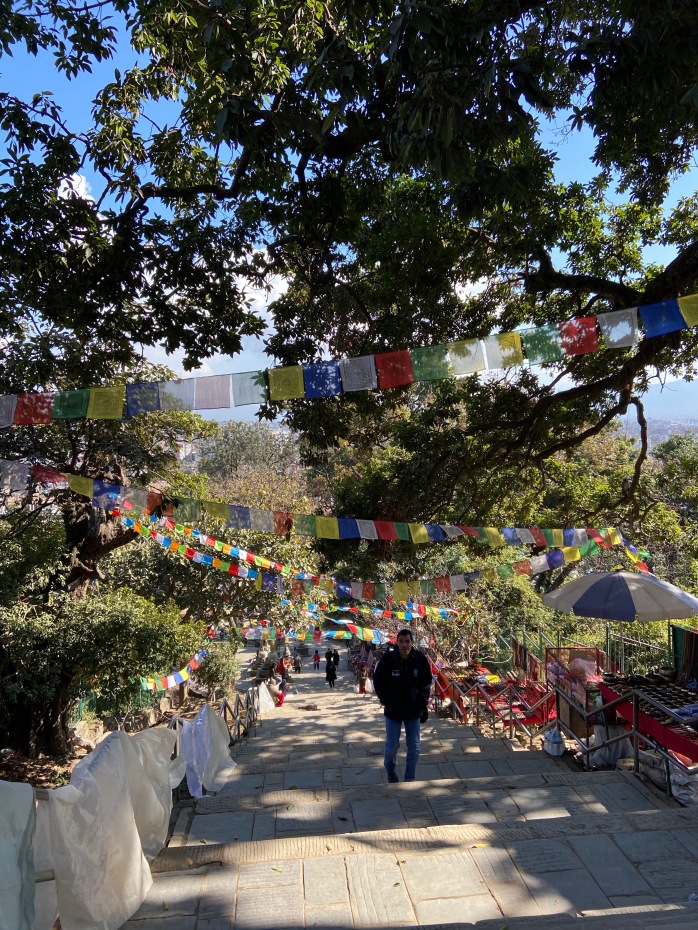 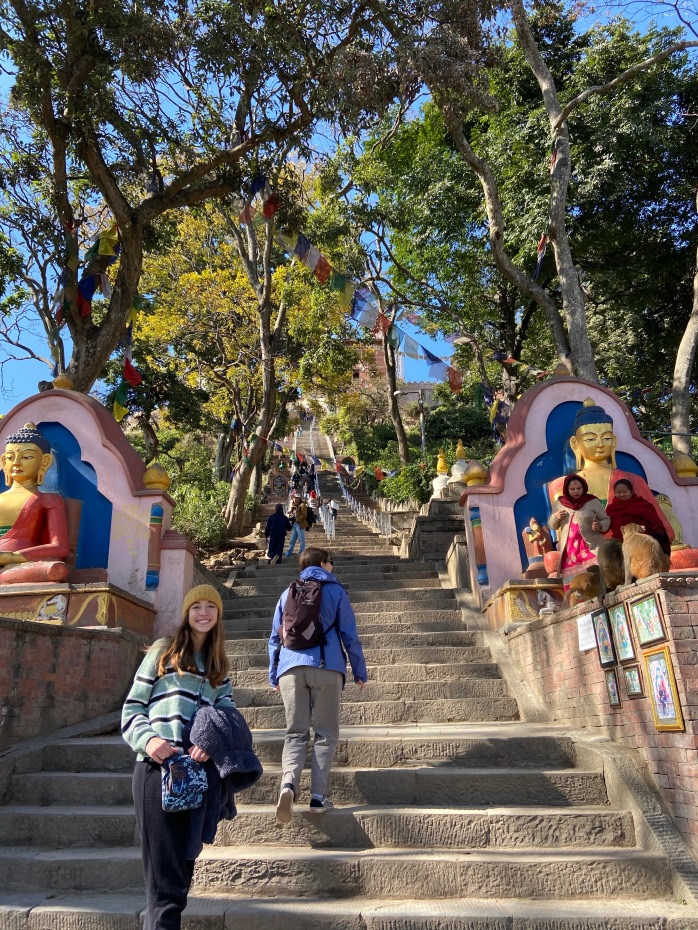 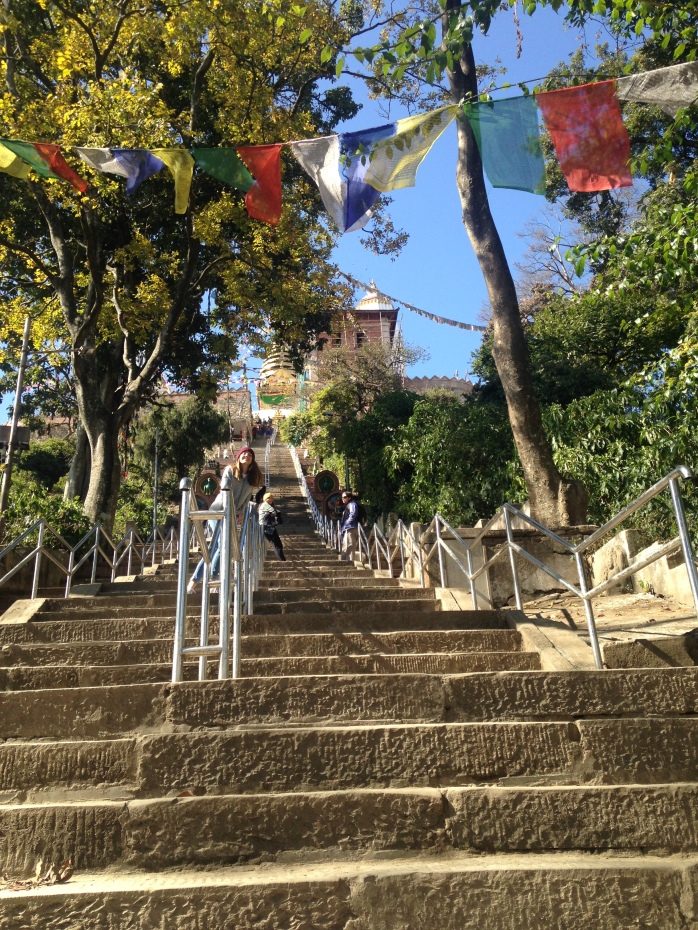 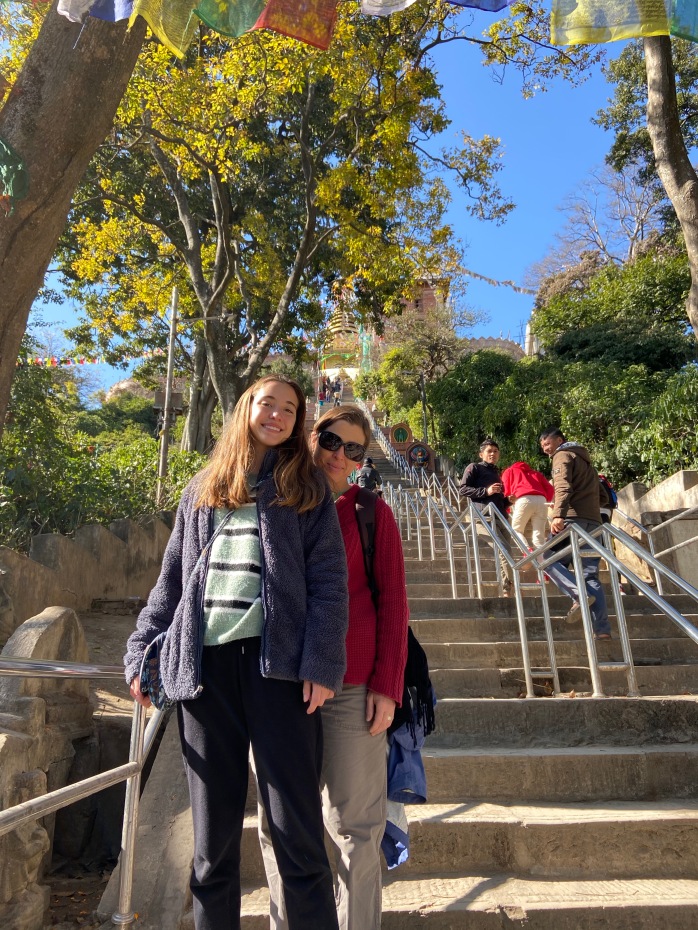 We slowly made our way up the 365 steps to the oldest holy site in the Kathmandu Valley, which dates back to the 5th century.  Hindus and Buddhists alike come here to worship and as you stand amongst the temples that overlook the vast valley surrounded by the Himalayas, it is hard not to be inspired.  There were quite a few visitors and some of it was still under renovation from the 2015 earthquake, but it was pretty fantastic. 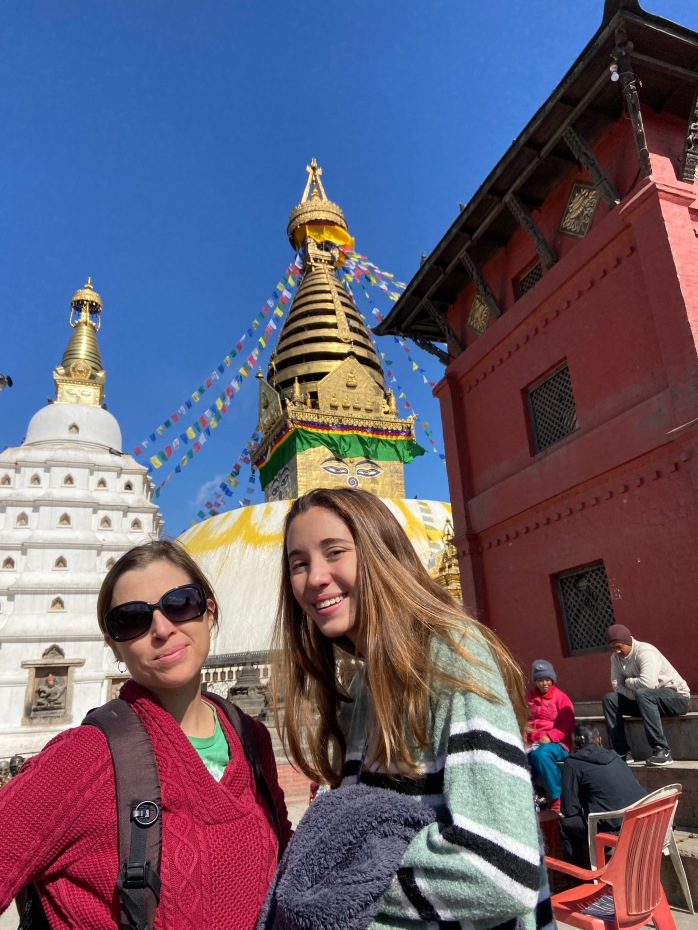 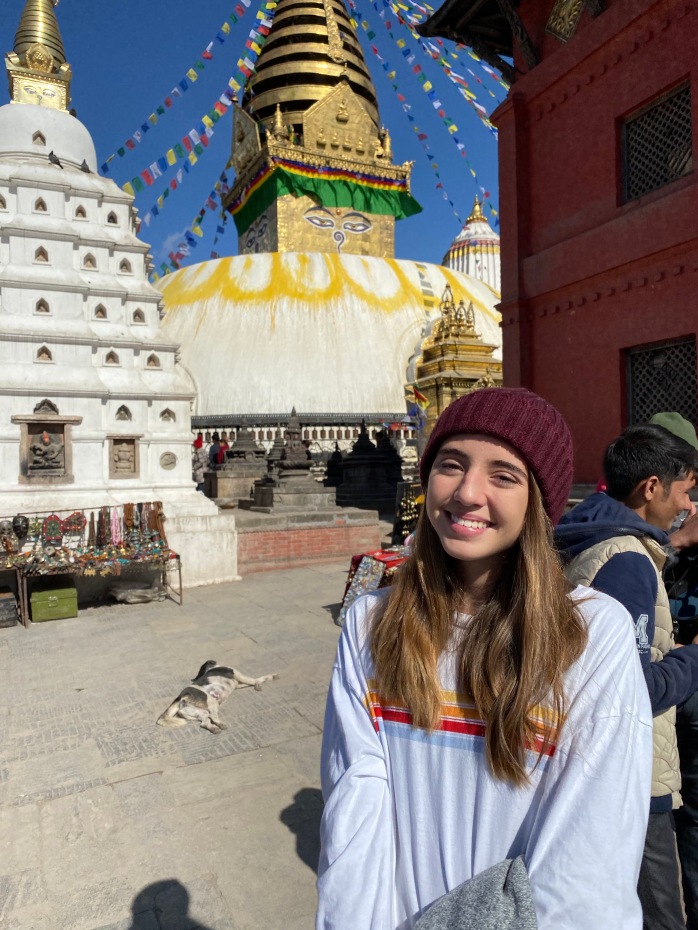 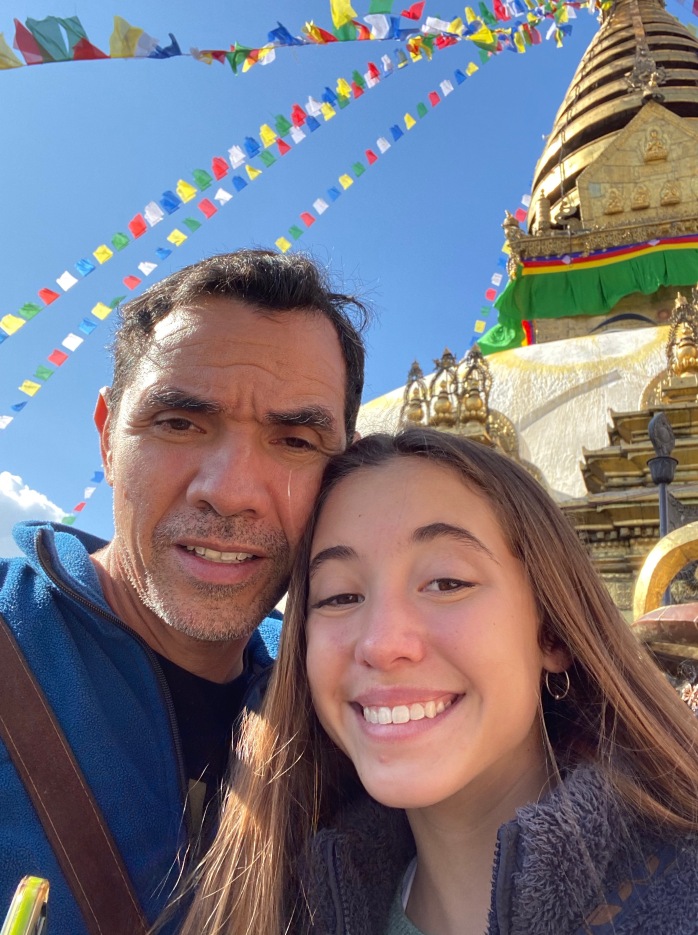 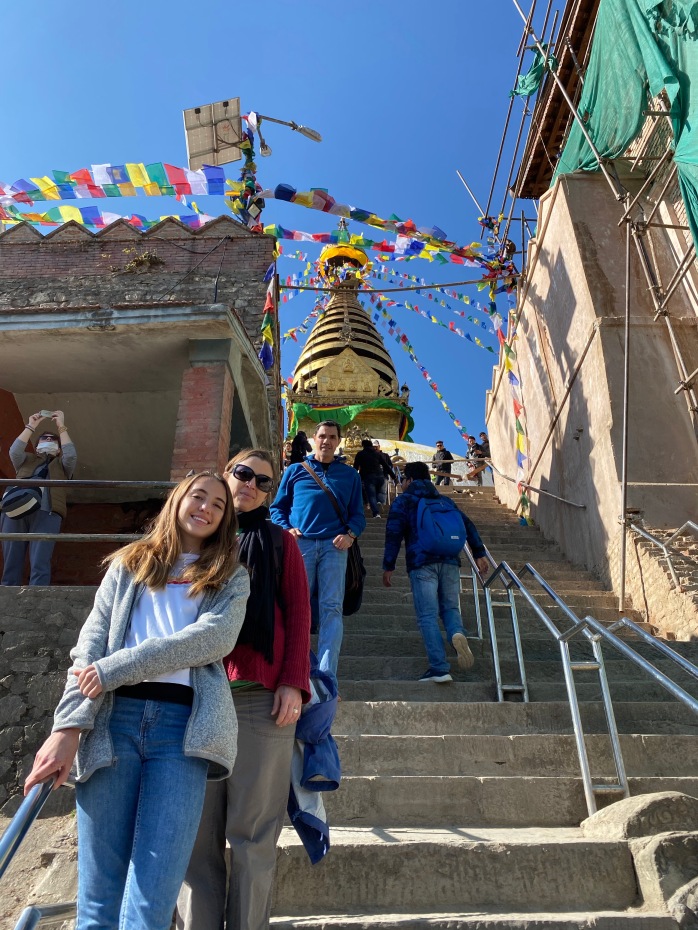 As we made our way back down, it became apparent that Marty was in no shape to make the hour trek back to the hotel.  I bartered with a taxi driver and got him down from 500 nr to 250.  The girls were impressed with my skills, so chalk one up for Mom!!!

We plan on making our way out of the city soon to get a bit of reprieve from the noise and pollution.  Marty and the girls want to catch a glimpse of Mount Everest and I am up for anything.