Today we ventured to the ancient city of the Zapotec Indians… Monte Albán.  It is perched high above the city of Oaxaca on a hilltop and offers spectacular views of the city and the surrounding pueblitos.  At one time, Monte Albán had upwards of 40,000 inhabitants and reigned for at least 1,200 years between 500 B.C. and 750 A.D.  As far as ruins go, it is quite fabulous.  When I was here 25 years ago, you could climb freely on all of the ruins. Now I would say you can climb on about 50% of them.  The number of tourists were not bad at all, and we had a lovely morning scaling the temples and taking in the beauty of the valley of central Oaxaca. 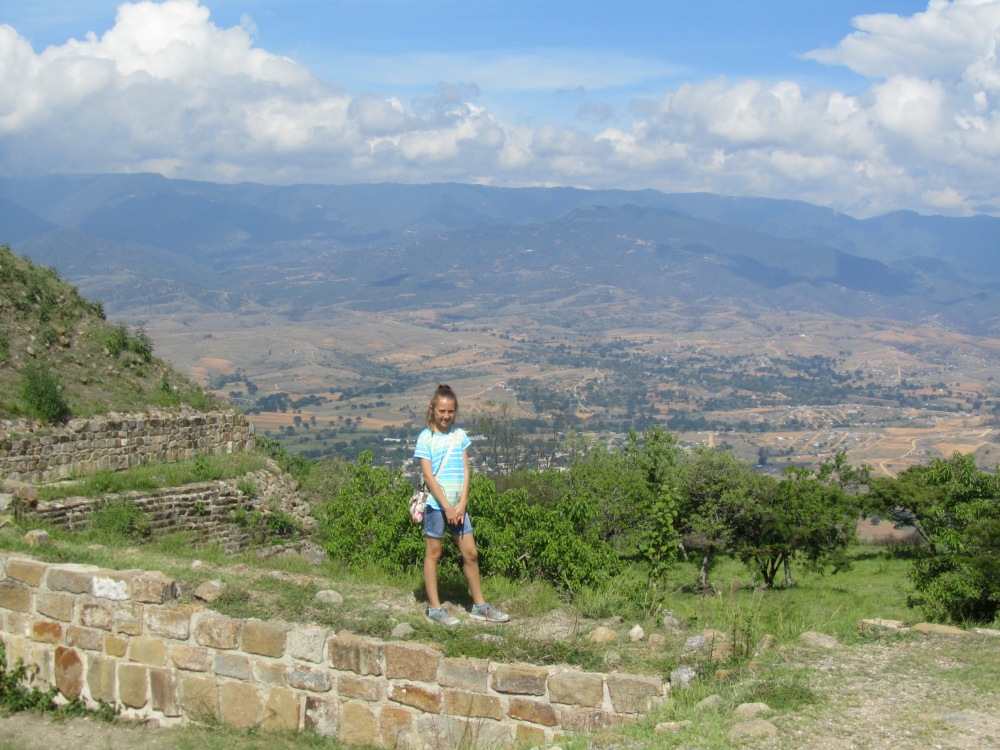 We were ‘lucky’ enough to have a not-yet famous tour guide in our midst.  His name is Martin.  Please be aware that his historical accuracy is quite dodgy at times.

Instead of booking a tour bus to take us to Monte Albán, we decided to take a taxi to the ruins early this morning.  We were assured that it would be easy to find a taxi for the return trip.  That was not the case, and for a brief moment it seemed as if we were to be stranded on that lovely hilltop forever.  I asked a local vendor about the taxi situation.  Reiterating the fact that we were out of luck as far as a return taxi went, he then proceeded to ask me how much I paid for the taxi and then told me to wait a moment while he went to talk to a friend.  He came back and said his friend would give us a ride back for 50 pesos more than I paid initially, but that his Ford Explorer would be far more comfortable than a taxi.  Now normally, I know better than to accept rides from strangers, especially when in a foreign country, but I had few options and I decided to go for it and hope for the best.  Besides, I had Party Marty with me.  We hopped in the back of his car and took a chance.  As it turns out, he was possibly the nicest guy on the planet, and we had a fabulous conversation and taught our kids a lesson in the process.  (Not the lesson about riding with strangers, the lesson that you find the nicest people where you least expect to.)  His name was Mario and he had lived in Georgia and San Jose, California working in construction up until about seven months ago.  He returned to Oaxaca because he missed his family and the less stressful way of life down here.  We helped him practice his English and he gave us local insight on Oaxaca.  We got his phone number and he said if we needed anything during our stay to give him a call.

Back in the city as we were heading to yet another coffee shop, our friend Max expressed how amazed he was at how nice everyone is here if you just put forth the effort to speak their language and get to know them… and how the sterotypes he had heard about before he arrived were 99% wrong.

That my friends is the magic of travel…enough said.