Bienvenidos a Oaxaca. After twelve hours in airports and on airplanes, we finally landed in Oaxaca last night around 8:00. I think I have decided that I really don’t like airport layovers. Sitting in an airport for upwards of seven hours straight is simply grueling. But then again, I suppose it depends on the airport. In Beijing, there were sleeping areas with lounge chairs where one could sleep comfortably for hours on end. I suppose the only catch on that one was figuring out a way to snooze while somehow attached to your carry-on luggage in case someone tried to snatch your stuff while you were out. That, and of course making sure you woke up in time to catch your flight.

The seven-hour layover in Mexico City had no such lounge areas, and try as I might to lay down comfortably on a row of seats with built in arm rests, I confess that my attempt to sleep ended in utter failure. So, I just sat there and watched people. It is always fun to check out peoples’ shoes and choice of travel attire. It would seem that traveling in really high heels is now the norm… at least in Mexico City, anyway.

We landed in Oaxaca around eight, got our luggage, and proceeded to the taxi stand. It is always a tad disconcerting when you give the woman behind counter the address to the house you are staying at and she tells you that the street does not exist. It is at times like these that I am thankful for my ability to communicate in Spanish. I assured her that it did in fact exist, for I had looked it up on Google maps before we had left. She simply shrugged her shoulders and I paid for the taxi and walked out to find a driver. Unfortunately, the driver had never heard of the street either. It was at this point that I asked him if he had a cell phone. He was really old and had a flip phone. Not that this matters, but he couldn’t see the numbers, so I lent him my readers and had him call the guy who was meeting us at the house. Luckily he answered and was able to explain exactly where to go. Piece of cake and we arrived an hour later.

For this trip, I rented a house on-line through VRBO. The website shows you pictures of the house, but basically, you never really know what you are getting until you show up. Let me just say that I completely scored on this one. The house looks like it is straight out of Architectural Digest. It is all concrete and wood, has vaulted ceilings with wooden beams, an abundance of skylights, four outdoor patios with views of the mountains, is decorated with amazing artwork throughout, and is only a few blocks from the city center. It is absolutely amazing except for the fact that the ceiling to floor windows throughout the house tend to wake you up really early and heat up the house greatly in the afternoon. There is no air-con (which is completely normal down here) and if you open the doors or windows to let in fresh air, you are essentially inviting more mosquitoes and insects to join you for the evening (not a screen in sight.) This is when you realize that you are no longer in your climate-controlled world and you must find peace with the critters you will live side by side with for the next month, or you shall perish. I am working on that inner peace as I write, killing one crazy ant at a time.

Oh and at the moment there is a torrential downpour happening outside… looks like the skylights leak.

Ah… when in Rome.

Last night after we finally made it to the house and got the tour, we set out for a much-deserved late night dinner. The first café we stumbled upon happened to be this cool little café / bookstore with mostly vegetarian food and a lovely atmosphere. We randomly chose a few dishes off of the menu and were completely floored by the amazing food. We are traveling with the son of a friend for the first week of our trip, he is 14, and I must say it is super fun to watch someone who has never been to Mexico experience it for the first time.

This morning, Marty got up early to go for a jog and get his bearings on the city. (You sort of can’t help it with the sun pouring in at 6:30.) We had a most amazing breakfast and spent the rest of the morning walking around town. I have not been to Oaxaca since 1992 and although it is certainly bigger, it still has a certain charm. 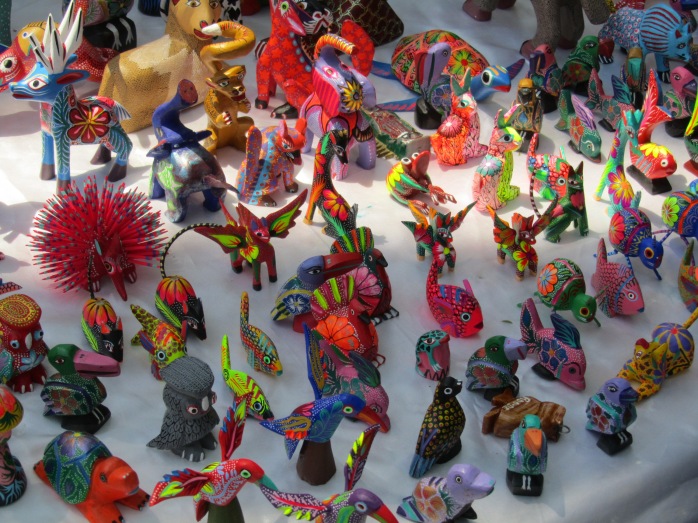 We ended our jaunt around one with a trip through the meat section of the Mercado. For some reason, Marty felt Max and the girls needed to experience rows upon rows of unrefrigerated meat… pig heads, yellow chickens, and giant livers… complete with swarming flies, to get the full ‘don’t you appreciate H.E.B. now?’ experience. I, personally, could have done without the smell and the vivid reminder of where my meat on this trip was coming from. Oh well, that is certainly an experience they won’t soon forget. 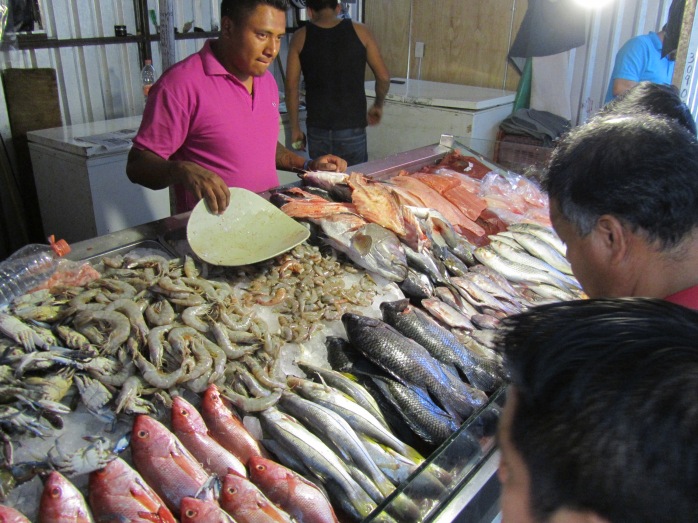 Tomorrow, we are off to the Zapotec Indian Ruins of Monte Alban. Should be fun!