This past week of language school has been insightful and fulfilling. I can’t tell you how exciting it is to see my students use their Spanish in ways I could never simulate in the classroom. I’m not taking credit, but they have some mad Spanish skills!

Wednesday morning Marty woke up at 5 a.m. to a loud exploding sound. He thought it must be bus backfire or fireworks, so he went back to sleep. He then woke up at six to go for a morning run with a couple of the kids. Halfway through the run he heard it again. He looked over his shoulder at the Volcano del Fuego in the distance and saw huge clouds of smoke shooting towards the sky. No one on the streets seemed to be freaking out, so they went on their merry way. For the duration of the day, however, layers of ash slowly fell upon us and covered what seemed to be every surface of the entire city. It was on our desks at school, on the furniture inside the house, and over every car in the city. There was even a layer of ash on my laptop that was inside a room with no windows. All of our teachers said it was a rare occurrence and it seemed to be the talk of the town. A tad disconcerting, I’d say. However, my teacher put it into perspective: Better frequent little eruptions rather than one big one. Yes, I’d have to agree. 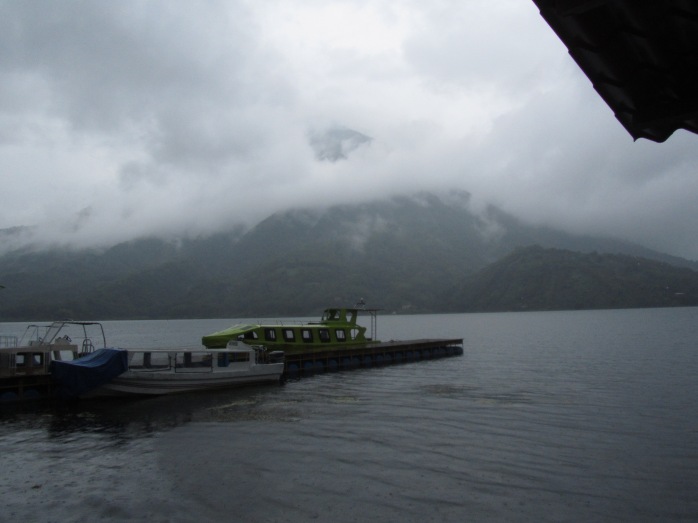 Saturday morning we left on a weekend trip to the highlands: Panajanchel on Lake Atitlan and Chichicastenango. Lake Atitlan is a beautiful volcanic lake lined with small villages about a three-hour drive from Antigua. The bus ride (or 12 passenger van, rather) was very winding and a bit grueling. Non-stop twisting and turning through the mountains can be fun at first, but gets old pretty quickly. One of the other passengers almost threw up and I found myself lamenting the breakfast I had eaten an hour earlier. When we finally arrived, the driver dropped us off in front of our hotel and we eagerly went inside.  I had reserved a hotel room last weekend and was shocked that there were only a couple of hotels that were not booked solid on line. It was called Hotel El Chapparal and although it was not cheap, we were certainly roughing it a tad. (Well, I suppose when compared to the immaculate house we live in at the moment.) The large stark room was filled with six double beds with varying degrees of protruding springs and a bathroom with exposed wires coming from the ceiling. It was not bad really, just sort of uncomfortable and really loud. We were right on the street and when the American college kids returned at 3 a.m. with no end in sight to their evening, it got a little annoying. No worries, we were happy to stand outside of their room at 7:30 this morning and talk in very loud voices.

After dropping off our things at the hotel, we found a boat to take us across the lake to Santiago Atitlan. When I was here in 1996, it was a tiny village that had but a few buildings and housed the beloved Guatemalan “saint” Maximón. He is revered here in Guatemala and appreciates offerings of tequila and cigarettes. Now, I hardly recognized the town of 32,000 people. The 30-minute boat ride cost about $3.50 USD and all was going quite smoothly until it stared to pour. The next thing I knew, we were flying over growing swells and getting soaked by a combination of rain and lake spray. At a whopping 63 degrees, it was chilly and I wondered what the kiddos were thinking. At that precise moment, one of them turned around and said,” This is awesome, the best thing we’ve done so far!” Go figure! 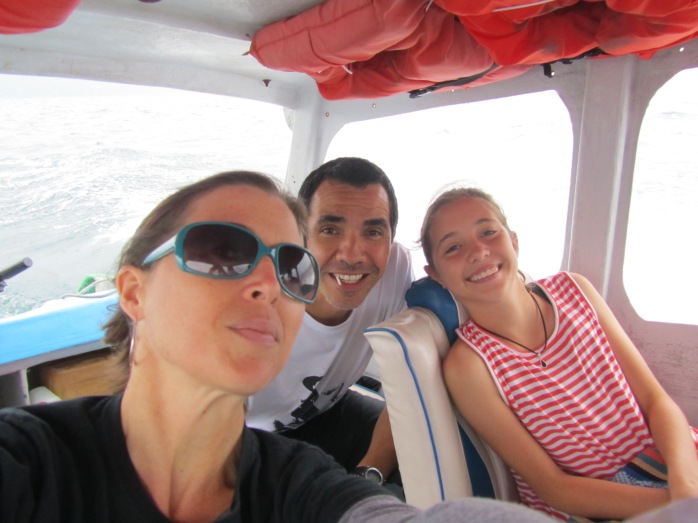 We then walked around Santiago Atitlan in the rain, sat in a coffee shop drying off, and then moved on to a restaurant for lunch. The towns around the lake definitely cater to tourists, and vendors and shopkeepers constantly bombarded us. We made our way back to Panajanchel on another boat and after the exhaustion set in, we went out for dinner before calling it a night. At the Italian restaurant we stumbled into, we were eventually flanked on either side by mangy stray dogs waiting for food. I would have expected the waiters to shoo them away, given the prices, but there they sat next to me pawing my back every few minutes. Why they did not bother any of the six other people at the table is beyond me.

Our next stop was Chichicastenango, home to one of the largest markets in Guatemala. After an hour-long van ride, we were dropped off in a random parking garage and told to return four hours later. We were told by a seasoned tourist to leave our belongings in the van, and I am so glad we did. The phrase “Swimming in a sea of humanity” cannot begin to describe the claustrophobic shopping experiences that lie ahead. We literally waded through people, merchandise, and chickens (both dead and alive) for the next four hours. I think I pulled a personal all-time best for haggling by purchasing all of my items for at least half the price I was initially quoted. Loaded down with bags four hours later, we emerged exhausted, a little disillusioned with shopping, and the satisfaction of knowing that we probably won’t have to buy anything ever again. That is… until we pass by the coveted soccer jersey stall. Oh these kids (and one male adult) and their infatuation with soccer gear.

We returned to Antigua about 4 and finished the weekend by visiting McDonald’s.  No, it is not something I am proud of, but we heard from other foreigners that is was the most amazing McDonald’s they had ever seen and it was a must.  So…. we went and they were right.  We’re talking automated ordering machines, tropical gardens, immaculate fountains, and a barista style coffee shop.  So stinking bizarre! 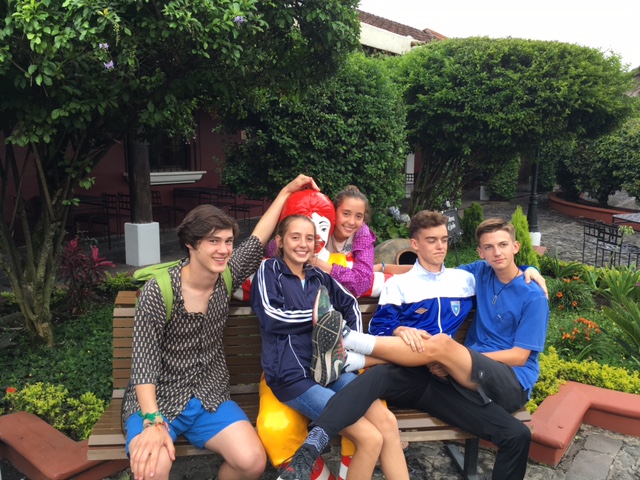 Tomorrow we are on to week two of language school and salsa dancing lessons.