Sitting on the curb of a deserted street at 5:45 this morning, I had no idea what the day had in store for us. I hired a shuttle to take us to climb Pacaya Volcano, but I had done little research in preparation. The only thing I read on-line was that if someone offered to sell you a walking stick, take it, or you would be sorry.

The shuttle arrived around 6:05 and we climbed aboard a 15-passenger van. Our travel buddies for the day were three middle-aged people from California and a Harvard law student. For the next hour and a half, we snaked through winding highways flanked on either side by coffee plantations and small towns. The driving was a lot like India, minus the incessant horn blowing. Weaving back and forth down foggy roads, we caught the first glimpses of true poverty. Even though I see it each time I travel out of the United States, it still shocks me every time. We just don’t see poverty like that at home and I always try to pay attention, lest I forget how truly lucky I have always been.

When we finally reached the parking lot to the park entrance, we were immediately bombarded with children trying to sell us sticks. I had already decided to heed the advice I read on-line and snatched up four for 5 quetzales each (about 75 cents). I think the other passengers in the van thought I was a sucker. I bet it wasn’t five minutes into our climb before they changed their minds. Honestly, it turned out to be the best 75 cents I have ever spent. For the next 2 hours we climbed and climbed and climbed. The trail was black volcanic rock and ash, with a considerable amount of horse dung mixed in. (People who don’t think they can handle the climb rent a horse.) Imagine trying to concentrate on walking straight up AND dodging fresh horse poop every 15 to 20 feet. Not an easy task, I assure you. Then of course, there were the dogs that accompanied us. I counted at least 10, and they make the trek with the guides several times a day.

When we finally reached the top, it was actually quite amazing. It felt like we were on the moon. You could see the distinct lava flows from 2010, 2014, and 2 ½ months ago. Steam was rising out of the fissures, and as an added tour bonus, we roasted marshmallows over one of them. In many places, the rocks were hot, and our guide said if we decided to walk around on the old flows, be careful we didn’t melt the bottoms of our shoes. It was actually quite spectacular, and we had a great time. The decent was easier for sure, but quite hard on the ol’ knees. The entire trek took about 3 ½ hours and by the time we crawled back in the van, I was pooped. Crazy enough, we were back in Antigua by 12:30. 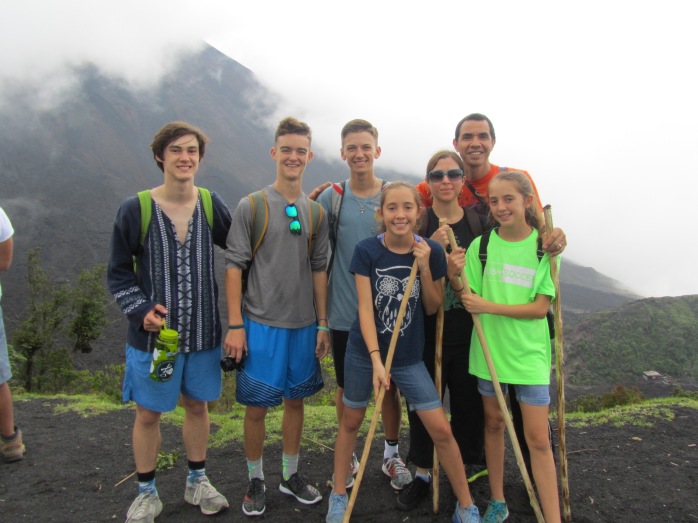